Why eCommerce businesses have not fully adopted 10Gbps? 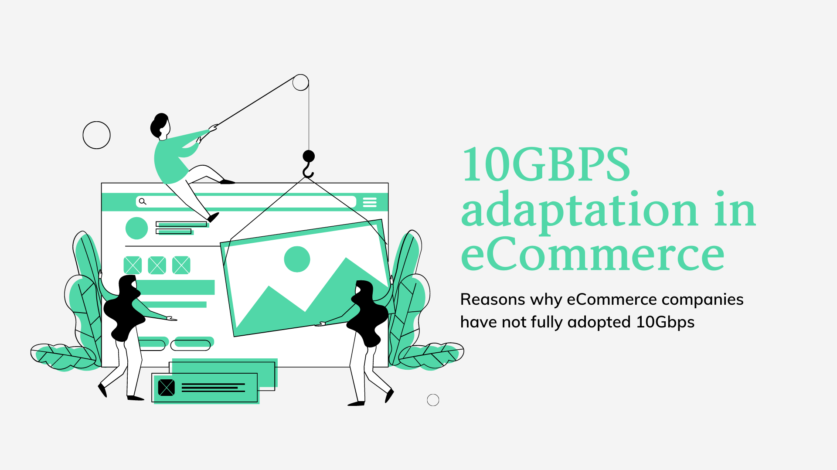 Despite 10Gbps being powerful and transformative, a large number of eCommerce companies have not migrated yet. Upgrading requires companies to bear some risks and overcome some barriers to enjoy the benefits. Like other technologies, users must gain confidence that 10Gbps is productive not just for the future but also for their current growth stage. While the lag has been mostly due to the failure of eCommerce companies to understand the opportunity that the technology presents, technical concerns and failure of hosting and cloud companies to offer more information on 10Gbps have also stunted its adoption.

Lack of a strong strategic plan

In the world of business as of technology, you need to anticipate the market trends and make sure that you are a step ahead. Online businesses have grown threefold in the last five years and is expected to increase with even more pace. For your eCommerce to be ahead, you need to recognize the drivers of growth and aggressively invest in them to ensure that you are a leader in your niche. A large percentage of eCommerce companies have remained complacent with their networking options and have opted to improve other aspects of their business to remain competitive rather than upgrade to 10Gbps. These companies miss an opportunity to implement a more futuristic technology by choosing a cheaper option that does not offer more room for growth. According to John Considine, IBM general manager, a huge reason enterprises fail to upgrade to new exciting technologies is the lack of a strategic plan.

While 10Gbps is strategic technology because it offers an extraordinary capacity for your eCommerce to grow, it also offers enormous benefits today. 10Gbps increases your networking speed and stability tremendously. This improves user experience, thus increases sales revenue substantially. According to Google, only 15% of websites operate within the recommended page speed. Numerous surveys done on websites against Google’s standards with the Test My Site tool established that 85% of websites took more than recommended two seconds to load pages with others taking more than five seconds. This is worrying for your eCommerce since 37% of visitors will bounce your website if it takes more than five seconds to load without coming back, while 70% of online shoppers say that your website speed influences their buying decision.

Therefore, many eCommerce companies have failed to adopt 10Gbps due to the view that it is a futuristic technology that they will adopt when time is right. By so doing, however, these companies fail to position themselves to be market leaders today and in the future by ignoring the benefits that 10Gbps offers to companies now and its scalability capacity.

Lack of sufficient information on 10Gbps

Hosting and Cloud companies have failed to offer sufficient information to consumers on the uses of 10Gbps network connections. Much worse, most such companies do not offer 10Gbps options to their customers. For this, large portions of eCommerce companies are yet to understand the benefits of 10Gbps hence have not adopted the technology. Investing in innovation requires that the customers gain sufficient info on the risks and rewards, and it’s no different for 10Gbps network connections.

A large number of hosting and cloud companies portray 10Gbps as a technology for the future. This builds complacency among the eCommerce companies as they view their current networking options as sufficient. Thus, companies do not consider the benefits that 10Gbps would offer in terms of productivity and profitability. Furthermore, a lack of many Hosting and cloud companies offering a 10Gbps network option means that eCommerce companies that know the importance of the technology and who want to upgrade have to change their current hosting services providers with a provider who offers the option. Changing a hosting company is time-consuming, and the company will incur some costs, this deters some eCommerce companies from upgrading to 10Gbps networking.

While the cost of 10Gbps is not what it was a few years back, it is still significantly higher than other slower networking options. This has proved to be a barrier, especially among small companies that are looking to cut expenses. Closet switches often pass scores or several meters to uplink back to the network. To increase the distance, fiber optic cables should be added. To further enhance the distance, the quality of fiber optic cables should be considered together with a better quality transceiver. High-quality optic cables are expensive; this adds to the cost of upgrading to 10Gbps.

Incompatibility of 1Gbps core switches with those needed for 10Gbps also adds the cost of migrating. Ecommerce companies that want to upgrade cannot just order 10Gbps network option from their hosting services company, they need to upgrade the core switches, transceivers, and cables, this hinders some companies from upgrading.

ECommerce companies will only smoothly migrate to 10Gbps network connections if they are confident that they can afford it without considerably lowering their profit margins. While investment in the 10Gbps network will undoubtedly offer exciting returns to the companies, companies, especially small and startups, have failed to adopt 10Gbps due to cost considerations.

To reap the benefits of innovation, companies have to make a decision to invest in it before it saturates. This is particularly true for eCommerce companies and 10Gbps network connection. Companies that will lead the way by upgrading to 10Gbps will enjoy customers’ preferences since the innovation provides smooth connectivity and website speed that customers need. 10Gbps also improves search engine ranking, and this means that web users can get in touch with ease. Furthermore, the increase is speed as a result of upgrading to 10Gbps improves user experience and helps build trust between the eCommerce companies and the customers.

Lastly, the benefits of upgrading to 10Gbps outweigh all the costs and concerns in the long run. 10Gbps will boost your users’ experience, increase your market share, and boost sales revenue.

With GCH it is now even easier to move to 10GBPS either within our Cloud or for dedicated servers.

Want to upgrade your eCommerce site to 10GBPS? Leverage it with GCH Cloud Compute which offers 10GBPS on all sizes to everyone?

No Comments - be the first.

This site uses Akismet to reduce spam. Learn how your comment data is processed.